L&S was able to get compensation for two victims of police misconduct in the month of October. One man was wrongfully arrested and lost his motorcycle after officers fabricated evidence and lied to the Brooklyn DA’s about the events that took place. In another case, the Police unlawfully entered a women’s home searching for a suspect causing damage to the home and a violent commotion. Both clients received sizeable five figure settlements.

In a published decision in  the Supreme Court of Kings County L&S Partner Masai Lord’s motion to grant suppression of evidence was granted.  Not only did the Court find that the search was a violation of the defendant’s constitutional rights due to an improper inventory search, but that that the officers did not have probable cause for arrest.  Great job Masai! 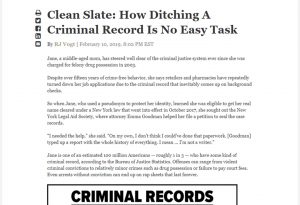 L&S, which also owns and operates sealmyrecord.nyc, has been featured in an article on Law60 discussing the barriers to people with criminal records getting their records sealed.  The article mentions that 99% of New Yorkers who have eligible for sealing still have not applied to get their record sealed.  L&S Partner Masai Lord spoke about why it is necessary to retain an expert attorney to ensure that your application is approved:

L&S Partner Abraham Rubert-Schewel was featured on ABC recently to discuss the unjust shooting of our unarmed client, Michael Bates.  Mr. Schewel, using body cam footage exclusively obtained by L&S, clearly showed that the police used excessive and unnecessary force in shooting Michael Bates when was unarmed and simply walking down the street.

St. Clair Steward was wrongfully arrested and charged with attempted murder after being picked out of a “mug shot search.”

Queens Detectives asked a victim to search through a random police database of mug shots.  After viewing 31 photos, the victim picked Mr. Steward’s and then identified him one day later in a line-up.  Based on this identification alone, Mr. Steward was held in jail for over two months.  He was released only after DNA evidence exonerated him.

This case exposes the problems inherent in “mug shot searches” and the fallibility of eye-witness identification.  As documented by the Times, many of the nations top police forces no longer use this practice because of its potential for suggestiveness and danger of false identification:

As the number of photos shown increases, “the more likely you are to encounter someone who looks like the person who committed the crime, but didn’t,” said John Wixted, a professor of psychology at the University of California, San Diego, who researches eyewitness memory.

Lord & Schewel is seeking compensation for Mr. Steward and a change in the New York Police Department’s photo identification procedures.  If you are a victim of a wrongful arrest, detention, or conviction please contact Lord & Schewel Today.

Excerpted from the New York Times.

Noting that marijuana has become increasingly accepted by society, a federal judge in Brooklyn made an unusual promise on Thursday: He pledged he would no longer reimprison people simply for smoking pot.

In a written opinion that was part legal document, part mea culpa, the judge, Jack B. Weinstein, 96, acknowledged that for too long, he had been sending people sentenced to supervised release back into custody for smoking pot even though the drug has been legalized by many states and some cities, like New York, have recently decided not to arrest those who use it. Under supervised release, inmates are freed after finishing their prison time, but are monitored by probation officers.

“Like many federal trial judges, I have been terminating supervision for ‘violations’ by individuals with long-term marijuana habits who are otherwise rehabilitated,” Judge Weinstein wrote. “No useful purpose is served through the continuation of supervised release for many defendants whose only illegal conduct is following the now largely socially acceptable habit of marijuana use.”

Supervised release, administered in courts across the country by the federal probation agency, was created in 1984 to help rehabilitate people who have finished prison terms. But certain violations can lead to reimprisonment: among them, using drugs, getting caught with weapons or associating with other known criminals.

Get in touch today.

Prior results do not guarantee a similar outcome.